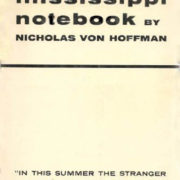 One of those who watched and was watched in the turbulent summer of 1964 was Chicago Daily News reporter Nicholas von Hoffman.
Through ten tense weeks and over 6000 miles of dusty roads and highways, from the Delta to the piney hills to the Gulf, von Hoffman studied the state of mind of the State of Mississippi.
Mississippi Notebook is his vivid and entirely honest record of that summer, a summer that was marked by murder, violence, and intimidation on a scale that is difficult to grasp for any but those who witnessed it, or—and worse—for those who were made to suffer it.
Sometimes it is the way people talk, how they look, the small but illuminating incident overlooked in the broad sweep of the news that really tells the story and makes a complex social crisis understandable.
Such is the case with Mississippi Notebook. It is a finely detailed and deeply disturbing report on a state and its people, white and black, who are playing a major role in the greatest domestic crisis now facing the nation.

The Legend of John Brown: A Biography and a History by Richard Owen Boyer
Scroll to top