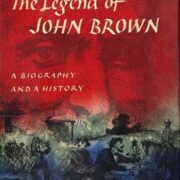 The Washington Post:
“In Boyer’s words, written with a brilliant blend of passion and objectivity, a vanished America comes alive again, the passions of the day boil anew, and we are made to understand how it was that a failed tanner, sheep raiser and wool dealer named John Brown became a man possessed.”

More from the Washington Post:
His Truth Goes Marching On
By Jonathan Yardley
January 28, 1973

HERE IS A book of surprising breadth, insight, compassion and historical vision—the first of what is to be a two-volume study of John Brown and his times. It recreates the whole fabric of our period of greatest national crisis, and it persuasively argues that the much maligned and misunderstood John Brown was the “central figure” of his age—the man who is “transformed and shaped by the experiences of his generation and in turn transforms it.”
That is a considerable assertion, and Richard O. Boyer has written a considerable book to investigate it. The Legend of John Brown is not merely the story of the first 55 years of its subject’s life—though merely as that it is excellent—but a panoramic view of the nation as it plunged toward civil war, and a series of incisive sketches of men and women on both sides of the conflict who at one time or another touched the life of John Brown.

Up to now, Boyer contends, Brown’s biographers have found it “enough to tell of Kansas and Harper’s Ferry.” Boyer’s purpose is to locate the “genesis” of those traumatic events, the tangled process by which Brown resolved the conflict between his business ambitions and his opposition to slavery, and be- came the fiery-eyed zealot who lives now in American legend.

John Brown—the very name was made for legend—has usually been portrayed in stark, absolute terms: he is seen either as a devil, a psychotic whose mad vision led himself, his sons and other men to death in the bizarre folly of Harper’s Ferry; or as a saint, an angel of God whose divinely ordained mission touched the conscience of the nation. Boyer sees him differently: as a human being. In Boyer’s masterly portrait, Brown emerges as a troubled, indecisive man who was at last touched by the greatest moral issue in our history.

As we see him through Boyer’s eyes, he is in many respects an archetypal American, a man of the land:
“This land, to the discerning, accounts for much of John Brown, his urge for wealth, his hymn-singing, and his praying, his homely understated attitude with its echoes of defiance and boasting, his restlessness, the covered wagon that he knew, the posture which combined distinction with rusticity and both with an everlasting search for something perhaps finally found. But so complete was his identification with the large and violent land, so thoroughly was he its product, that the Ohio farmer who was John Brown found no difficulty in communicating with Parker or Higginson, Emerson, Thoreau, or the black man fighting slavery, all of whom were as American and perhaps as permanent, while there is an American consciousness, as the land itself.”

….We encounter other men—Theodore Parker, Thomas Wentworth Higginson, Frederick Douglass, among the abolitionists; William Walker, Henry Wise, Edmund Ruffin, among the Southerners—who were likewise seized and transformed by the historical moment, and the story of their metamorphosis makes Brown’s more understandable. We encounter, too, the great events that built inexorably toward the shuddering climax of national cataclysm: the Kansas-Nebraska Act, the Underground Railroad, the harsh debates on the floors of Congress, the murderous violence that accompanied the settlement of Kansas. In Boyer’s words, written with a brilliant blend of passion and objectivity, a vanished America comes alive again, the passions of the day boil anew, and we are made to understand how it was that a failed tanner, sheep raiser and wool dealer named John Brown became a man possessed.

Legend, Boyer reminds us as the book begins, is “often defined as the popular if unverifiable story of a hero coming down from the past.” In this book, however, we are given legend as it was envisioned by John Jay Chapman, the estimable 19th-century journalist who wrote with much feeling and perception about John Brown’s life. Brown’s life, Chapman said, is an example of “an immortal legend—perhaps the only one in our history.”
Richard O. Boyer has taken Chapman’s words and built an extraordinary book around them, one that affirms and enlarges them…

Power to the People: The Rise and Fall of the Black Panther Party by Jim Ha...
Scroll to top