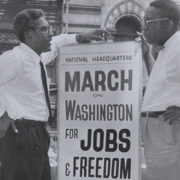 DURING MUCH OF THIS CENTURY, a great struggle has been waged in the United States for full social and economic equality for its African American citizens. From the student sit-ins of the 1930s to the bus boycotts of the 1950s to the massive protest marches of the late 1950s and early 1960s, most of the battles were nonviolent ones.

This was due, in large part, to the work of a man named Bayard Rustin. He was not a famous orator, like Martin Luther King Jr., or a flamboyant personality, like Adam Clayton Powell Jr., or even the head of any major civil rights organization. But for many years, Rustin was a key player in every major civil rights initiative in the United States. A passionate believer in nonviolent resistance, Rustin helped steer the movement in that direction. And with his skill in organizing and his almost limitless energy, Rustin made it possible for blacks and whites to work together for a common goal: the equality of all people. His crowning accomplishment, the 1963 March on Washington, led to the most sweeping civil rights legislation the country had ever seen.

In the clear, compelling narrative for which he is renowned, James Haskins paints a vivid portrait of activist Bayard Rustin against the backdrop of the twentieth-century American civil rights movement.

Buy a site-wide perpetual license for your school, book club, family, or religious or civic group through Gumroad:
https://gum.co/YYaXQ

Sample or buy a  single copy on Amazon.

During his career JAMES HASKINS wrote more than one hundred books for both adult and young adult audiences, including Freedom Rides, published by Hyperion Books for Children; Rosa Parks: My Story (cowritten by Rosa Parks); The March on Washington; Black Music in America, a 1989 Carter G. Woodson Award winner; and Black Dance in America, a 1991 Coretta Scott King Award Honor Book.

Sharing Books with Your Students
Scroll to top