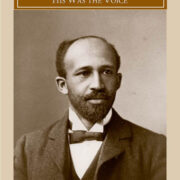 Teacher, social scientist, historian, poet, prophet—his was the voice that demanded equality, respect and dignity for the black man in a society that denied his humanity.

The memory of Dr. W. E. B. Du Bois is as important to the past and future of this country as any revolutionary figure before or since. Yet for years he was unknown to white America and, as a victim of the McCarthy witch hunts of the fifties, rejected by his countrymen. In this dramatic, candid biography, Emma Gelders Sterne presents W. E. B. Du Bois to a new generation that is entitled to the truth about the black man who cried “Freedom Now!” and “Black Power” when no one was willing to listen.

Buy a site-wide perpetual license for your school, book club, family, or religious or civic group through Gumroad:
https://gum.co/bJlYd

Or buy an individual copy, or read a sample on Amazon.

Drawing from the private papers of Du Bois himself, his publications, and the confidences of those who knew and worked with him, Mrs. Sterne has written an unconventional story that reads like fiction but tells the little-known facts of a fascinating life. Thanks to the support of Dr. Herbert Aptheker, Du Bois’ close friend and literary executor, Mrs. Sterne was allowed to examine unpublished materials by and about Du Bois.

William Edward Burghardt Du Bois was born in Massachusetts in 1868, three years after the emancipation of the slaves. His entire life was devoted to freeing those former slaves and their offspring from the burden of second-class citizenship. A brilliant scholar and orator who was graduated with honors from Fisk, Harvard, and the University of Berlin, Du Bois was a pioneer social scientist, champion of the emerging African nations, and a founder and controversial member of the NAACP.

He wrote nineteen books, hundreds of articles and poems, and created and edited two literary magazines. But most remarkable of all was W. E. B. Du Bois the man: a uniquely American patriot and prophet who, denied the right to return to his homeland, died in exile in Ghana in 1963—still a revolutionary at the great age of ninety-five.

A testimonial from a librarian:

“To the youth of today (and those of age who engage in creative thinking) from a librarian who believes in the power of the ‘word . . .’ ”

“I urge you to read this book. It will make you think. William Du Bois searched all of his life for directions that black and other Americans should take. I do not agree with some of the directions he has suggested and you may or may not! But he has anticipated this reaction and left an answer: ‘What I have done well will live long and justify my life. What I have done ill or never finished can now be handed down to others.’

“He was a man who was jailed by his government and refused entrance to the land of his birth. He was ignored by the people he sought to help and yet he left another message especially for you: ‘One thing I charge you. As you live, believe in life. Always human beings will progress to greater, broader, and fuller lives….’ ”

Harriett B. Brown
Supervisor of Libraries
Board of Education, New York City

The Author:
EMMA GELDERS STERNE, a former teacher and editor, has written more than twenty books in the past forty years, including Mary McLeod Bethune; Benito Juarez, Builder of a Nation; I Have a Dream; and They Took Their Stand. The recipient of many awards over the years, she was honored by the Women’s International League for Peace and Freedom, which established a children’s fund in her name.

Runaway Russia: An American Woman Reports on the Russian Revolution
Scroll to top