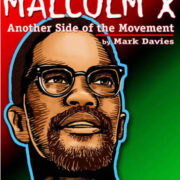 Born in Omaha, Nebraska, Malcolm X spent his teenage years living in a series of foster homes after his father’s death and his mother’s hospitalization. He engaged in several illicit activities there, eventually being sentenced to 10 years in prison in 1946 for larceny and breaking and entering. In prison, he joined the Nation of Islam, adopted the name Malcolm X, and quickly became one of the organization’s most influential leaders after being paroled in 1952. Malcolm X then served as the public face of the organization for a dozen years, where he advocated for black supremacy, black empowerment, and the separation of black and white Americans, and publicly criticized the mainstream civil rights movement for its emphasis on nonviolence and racial integration. Malcolm X also expressed pride in some of the Nation’s social welfare achievements, namely its free drug rehabilitation program. Throughout his life beginning in the 1950s, Malcolm X endured surveillance from the Federal Bureau of Investigation (FBI) for the Nation’s supposed links to communism.

In the 1960s, Malcolm X began to grow disillusioned with the Nation of Islam, as well as with its leader Elijah Muhammad. He subsequently embraced Sunni Islam and the civil rights movement after completing the Hajj to Mecca, and became known as el-Hajj Malik el-Shabazz.[A] After a brief period of travel across Africa, he publicly renounced the Nation of Islam and founded the Islamic Muslim Mosque, Inc. (MMI) and the Pan-African Organization of Afro-American Unity (OAAU). Throughout 1964, his conflict with the Nation of Islam intensified, and he was repeatedly sent death threats. On February 21, 1965, he was assassinated. Three Nation members were charged with the murder and given indeterminate life sentences. Speculation about the assassination and whether it was conceived or aided by leading or additional members of the Nation, or with law enforcement agencies, have persisted for decades after the shooting.

A controversial figure accused of preaching racism and violence, he later amended some of his views on racial segregation and white people after his pilgrimage to mecca and believed that true brotherhood was, in fact, possible. Malcolm X is a widely celebrated figure within African-American and Muslim American communities for his pursuit of racial justice. He was posthumously honored with Malcolm X Day, where he is commemorated in various countries worldwide. Hundreds of streets and schools in the U.S. have been renamed in his honor, while the Audubon Ballroom, the site of his assassination, was partly redeveloped in 2005 to accommodate the Malcolm X and Dr. Betty Shabazz Memorial and Educational Center.  Source: Wikipedia.

About the Author
Born in Cardiff, Wales, Mark Davies graduated from Cambridge University, England, with a degree in social anthropology. Since then he has worked in theater, television, children’s publishing, and magazine publishing.  Malcolm X: Another Side of the Movement is his fourth book for a juvenile audience.

The author is indebted to Alex Haley and his book The Autobiography of Malcolm X for information regarding Malcolm X’s early years. He would also like to express his gratitude to Dr. Betty Shabazz, Sule Greg Wilson, Professor Aldon Morris, and Della Rowland, all of whose contributions and inspiration helped shape the book and enlighten the author.

Serenade to the Big Bird with Maps and a Study Guide

The Curies and Radium by Elizabeth Rubin
Scroll to top