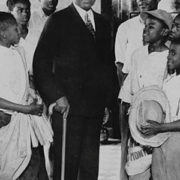 To read this ebook using Calibre on a computer, or for Google Play Books on your tablet, or iBooks on an iPad, download this epub format.


Download Now!
To read on a device from Amazon, or on the Kindle app on your computer, here is the ebook in mobi format.

In May 1905 Robert S. Abbott started publishing the Chicago Defender. The paper attacked racial injustice, particularly lynching in the south. The Defender did not use the words “Negro” or “black” in its pages. Instead, African Americans were referred to as “the Race” and black men and women as “Race men and Race women.” Many places in the south effectively banned the paper, especially when, during World War I, Abbott actively tried to convince southern blacks to migrate to the north. Abbott managed to get railroad porters to carry his papers south and he ran articles, editorials, cartoons -even train schedules and job listings to convince the Defender’s southern readers to come north. The “Great Northern Migration,” as it was called in the Defender, resulted in more than one million blacks migrating north, about 100,000 of them coming to Chicago. The Defender was passed from person to person, and read aloud in barbershops and churches. It is estimated that at its height each paper sold was read by four to five African Americans, putting its readership at over 500,000 people each week.

Son of ex-slaves, Abbott passed from small-town obscurity to national preeminence, due neither to great wealth nor hereditary status, but by sheer character, determination and imagination. He was a crusading journalist, who ultimately developed into a national leader, and, in the process, became a millionaire. As a newspaper editor, he influenced and molded the opinions of millions of Negroes in the United States, and therefore his career is of unique interest—indeed, his extraordinary achievement is a triumphant American success story.

The roots of greatness should be sought in a man’s formative years. Until now, most Negroes who have achieved anything noteworthy seemingly have no traceable background—notably Booker T. Washington and George Washington Carver—and like Topsy seem merely to have “growed up.” But Abbott’s accomplishments represent continuity of family enterprise and perseverance. However, the purpose of this volume is not at all genealogical. Essentially, this is a biography of a people, for Abbott’s life and times spanned the most triumphant period of the Negro in the United States. Born three years after the promulgation of the Emancipation Proclamation, he lived to see and chronicle the spectacular progress of his people.

In the burgeoning economic times of the 1920s, with hundreds of new products and the growth of advertising, the Defender became an economic success and Abbott became one of the first African American millionaires.

Directions on how to email this file to your device are here.
To add this mobi file to your Kindle for PC software to read the chapters on your computer, see these instructions.

The New Legions by Donald Duncan. Grade level is 6.1.

So Big by Edna Ferber
Scroll to top