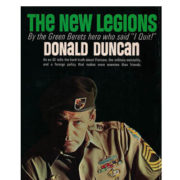 Read about his patriotism, his courage and his questions. Buy this title on Amazon for $2.99 at https://www.amazon.com/New-Legions-Donald-Duncan-ebook/dp/B077W7P19V/

Winner of 1923 Pulitzer Prize: One of Ours by Willa Cather

The Lonely Warrior: The Life and Times of Robert S. Abbott
Scroll to top