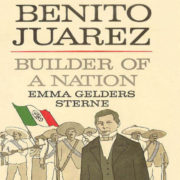 Download in the epub format for Chromebooks and Apple devices:

Anyone who has traveled in Mexico asks who Benito Juárez was. His story is told on the painted walls; his statue stands in every city and in the plazas of small villages. From one end of the country to the other schools, colleges, and universities bear his name. Streets and broad boulevards are named in his honor along with the names of the other revolutionary heroes who brought the Mexican people the national independence they prize above all else. Benito Juárez lived during the crucial period in Mexico’s emergence as a democratically self-governing nation and, perhaps more than any other single individual, helped to shape its destiny. With insight, understanding, and a highly developed sense of history, Emma Gelders Sterne has told the story of Benito Juárez, from birth in an obscure Indian village through an entire lifetime of effort and achievement on behalf of his native land.

Juarez was a lawyer of Zapotec ancestry who played a decisive role in a tumultuous period in the history of Mexico. A judge, a city councilman in Oaxaca, and a governor of the State of Oaxaca, he was a liberal power during political culture wars in mid-Nineteenth Century Mexico. He was imprisoned and exiled for his political stance when conservatives reigned in Mexico City and served as Minister of Justice and Chief Justice of the Supreme Court when the liberals were in power. In 1857, a revolution brought the conservatives back to power, and Juarez declared a rival government with himself as president. Ultimately, he and his side regained power. However, French forces invaded the country, and the conservatives invited the Austrian nobleman Maximilian Hapsburg to install a monarchy to replace Juarez’s government. War ensued, resulting in the Mexican army defeating the French. A turning point in the war was the Battle of Puebla on May 5, 1862, which is celebrated today as the Cinco de Mayo in Mexico and among many Texans. The only full-blooded native to serve as President of Mexico, Juarez served five terms. He is considered a national hero in Mexico.

Juárez today:
Today’s Mexicans view Juárez much like some Americans see Abraham Lincoln: he was a firm leader when his nation needed one, who took a side in a social issue that drove his nation to war. There is a city (Ciudad Juárez) named after him, as well as countless streets, schools, businesses, etc. He is held in particularly high regard by Mexico’s considerable indigenous population, who rightly view him as a trailblazer in native rights and justice.

EMMA GELDERS STERNE, a former teacher and editor, has written more than twenty books in the past forty years, including Mary McLeod Bethune; I Have a Dream; His Was The Voice: The Life of W.E. B. Du Bois, and They Took Their Stand. The recipient of many awards over the years, she was honored by the Women’s International League for Peace and Freedom, which established a children’s fund in her name.

Buy on Amazon if you want to keep all your ebooks inside Amazon.

So Big by Edna Ferber

Helmet for My Pillow: From Parris Island to the Pacific by Robert Leckie (Free...
Scroll to top