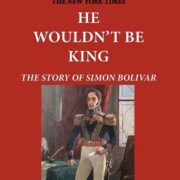 “Worth its weight in gold. A warm dramatic story of a man whose career was one of the most astonishing and colorful the world has known.” Parents Magazine

SIMÓN BOLÍVAR, hailed as Liberator by the people of South America, occupies the same place in their affections that George Washington does in ours. An aristocrat and a wealthy man like Washington, he risked position, wealth, and life itself to free South America from the unhappy rule of Spain. Like Lincoln in his love for the common man, he brought about the abolition of slavery a generation before that institution was ended here.

HE WOULDN’T BE KING is the first modern biography of Bolívar in English for young people, yet history provides few more exciting tales than the march across the Andes of Bolívar’s small but dauntless army; it can offer few stories to compare in color and surprise with Bolivar’s courageous career.

Nina Brown Baker tells Bolívar’s story fully and vividly. She has not only so portrayed the ideals of the man that we are the better for knowing him, but she has also given us the background that enables us to understand both Bolívar and the South America of today.

SIMÓN BOLÍVAR was a hero not merely through force of circumstances and period. He was truly cast in a heroic mold and should be known wherever greatness of spirit as well as deed is revered. His life is of special significance to us of the United States, not only be­cause of our growing sympathy with South America, but because it was from our own Revolution and our first leader, Washing­ton, that he drew much of the in­spiration to win freedom for his own part of the Americas.

It was a life so full and so dra­matic that there is plenty of room for both the fine biogra­phies for young people which this year has brought forth. It would indeed be difficult, and is unnec­essary. to make a final choice be­tween Elizabeth Waugh’s “Simón Bolivar: A Story of Courage,” previously reviewed in this department and Nina Brown Baker’s “He Wouldn’t Be King,” which has won the 1941 Intra-American Award annually pre­sented by the Society for the Americas. Mrs. Baker’s is per­haps more dramatic in its pres­entation of an essentially dra­matic life, and certainly there is a twinkling humor to throw into perspective some of the lighter aspects of a career and a strug­gle which inevitably took on at times a certain comic opera fla­vor, which really emphasizes the size of the task performed.

This would be good reading if only for the sketches of the col­orful figures which surrounded Bolívar: the picturesque, incredi­ble Páez: the dashing and equally incredible Manuela Sáenz, his eccentric tutor, Rodriguez; the loyal and charming Irishmen who fought under him. A host of such friends, and enemies too. come to life, but all these are properly dominated by the Liber­ator himself, and as the pattern of his life is unfolded in a finely proportioned narrative so is the greatness of his vision and of his achievement.

From a reviewer on Amazon:

“He Wouldn’t be King: The Story of Simon Bolivar,” by Nina Brown Baker is a delightful, very easy to read book that should be required reading in every American High School. Certainly, every High School student across the United States is well aware of the importance of George Washington but what about Simon Bolivar? Or Jose de San Martin for that matter? These men are great Western Hemisphere military generals responsible for freeing most of South America from strict colonial rule?

Bolivar, often affectionately called the Liberator, freed Colombia, Venezuela, Ecuador, Peru and Bolivia from Spanish oppression. San Martin freed Argentina and Chile. To this end, Bolivar had a boyish hero worship of Washington and regularly drew inspiration from the North American revolution. An added bonus of this book is that the author does an excellent job describing Bolivar’s critical relationships with other dynamic Generals, particularly Antonio Jose de Sucre, Francisco de Paula Santander and Jose Antonio Paez. The narrative also documents the enormous importance of British and Irish volunteers who joined Bolivar and the struggle against Spanish rule.

The narrative starts with Bolivar’s privileged childhood, his intellectual growth and finally his decision to lead his people to liberty. Bolivar is a great man, who frees the black man from slavery 46 years before Abraham Lincoln’s 1862 Emancipation Proclamation. He also refused to be King and chose instead to be his nation’s first President…like he beloved George Washington.

Baker downplays his many romances and the tuberculosis that eventually killed him. Nevertheless, the text is meticulously researched, well-written and objective. Although this book was published in 1941, it is still very relevant today and would be an excellent choice for a High School history book report or detailed term paper. The text is also complete with many beautiful black and white illustrations. Highly recommended.
Bert Ruiz