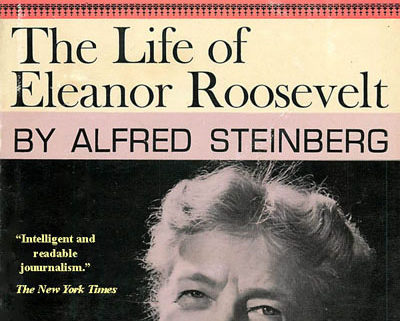 “The result is a piece of intelligent and readable, journalism.” – The New York Times

“Mrs. R.” is a clear objective year-by-year account of the life of one of the world’s most famous women. Enjoy a biography by a writer who knew Eleanor Roosevelt and was able to interview her contemporaries.

Sample or buy a single copy on Amazon.

Buy a site-wide perpetual license for your school, book club, family, and religious or civic group through Gumroad:
https://gum.co/Eiordn

The writer, Alfred Steinberg, is well known for his  biographies of Harry S. Truman, Lyndon B. Johnson, Eleanor Roosevelt and Sam Rayburn. He also wrote more than 200 magazine articles, as well as book reviews and features for the Washington Post, the New York Times, Reader’s Digest, the Saturday Evening Post, Harper’s, Collier’s, and American Heritage.

This was the first full-length biography of Eleanor Roosevelt, based upon her personal papers, when published in 1958. Previously known only through her own three-volume autobiography, Mrs. Roosevelt had remained something of a mystery and a legend, beloved by millions and disliked by some.

Over 4,000 of her personal letters and other private papers at the Hyde Park memorial library were studied by the author. He has woven all known sources of information into an extremely lively story, with the warmth and mastery of a fine novelist.

Here is the lonely childhood, disrupted by the death of loved ones, the shy emergence into wealthy society, the court-ship by Franklin under the possessive authority of his mother, the day-to-day events of Campobello and polio, the young wife’s reluctant participation in politics as the “eyes, ears and legs” of the man of destiny.

The reader will also see how the programs of the New Deal developed during the Depression, and how the Roosevelts worked together to repeal the Neutrality Acts in order to aid Great Britain at the start of World War II.

Eleanor Roosevelt became one of the world’s great travelers in her search for pertinent information concerning the state of all nations. Always the champion of the underdog, she gradually evolved into a figure alone and apart. Neither her husband’s death nor her own advancing age cut down the influence of this notable woman upon notable events.

An Excerpt from a Review by Arthur Schlesinger, Jr., The New York Times, October 12, 1958.

First Lady of the World

Mr. Steinberg has gone through the Roosevelt literature and talked with many survivors of the Roosevelt era. He was also, he states, permitted to examine “the personal papers, record books and voluminous correspondence of Mrs. Roosevelt.” (Unfortunately “Mrs. R.” contains no footnotes, and one cannot usually distinguish between what is quoted from a document and what has popped up in someone’s recollection.) He begins with the troubled childhood, describes the reluctant emergence of the shy and awkward girl and follows through the transformation into the capable but somewhat gushing matron and finally into the incomparable First Lady of the World.The story is told briskly and sympathetically but not. altogether uncritically; on such matters as the Roosevelts as parents, Mr. Steinberg writes with candor. The result is a piece of intelligent and readable, journalism. …

…I think,too, that Mrs Roosevelt who emerges from this book as a somewhat blander character than she really is. Mr, Steinberg quotes from one of her letters to President Truman. “There are two things which I wish to avoid above all else,” Mrs, Roosevelt wrote, “one, war; two, a Republican victory.” These two wishes express succinctly the different aspects of Mrs. Roosevelt’s personality: on the one hand, the luminous idealist, yearning for the good, the true and the beautiful; on the other, the old pro, filled with canny and salty realism. Mr. Steinberg does more Justice to the first than to the second.