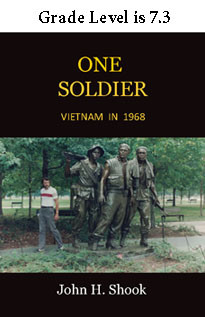 Who, or what, was the real enemy in Vietnam? The ever-elusive, jungle-wise Viet Cong and their NVA allies? The oppressive heat and torrential rains? The leeches, mosquitoes, and the jungle itself? Or the army whose regulations made you carry a .45 even though the firing pin was broken? Perhaps, each in their own way, they all were… and John Shook battled them all.

In One Soldier, he recounts his experiences and describes how he faced—and overcame—all the enemies a machine-gunner encountered in the Nam. Straight-from-the-shoulder, Shook tells of search and destroy patrols and night ambushes and slogging through a rice paddy, wondering when the first shot was going to come. You’ll be at his side during bull sessions on getting a “million-dollar” wound that would mean a return to the States and in firefights that turned his M-60 machine gun from a shoulder-numbing burden into a staccato, lead-spewing lifesaver.

Most of all, One Soldier is a story of combat, written in the immediate, gut-wrenching language that men at war resort to: “A burst of automatic rifle fire rips through the hooch inches above my elevated perch. Knowing exactly where my rifle hangs I reach out for it but grasp only air and wooden wall. … The firing in both directions is heavier now. There is yelling on the bridge. It is a black night, a void of vision punctuated by muzzle flashes and the crisscrossing streaks of tracers… Is that your 16?’ I yell. ‘What the f—. Who cares?’… ‘Where was your rifle when this s— started?'” 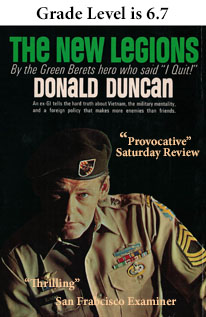 Read about his patriotism, his courage and his questions.

“Duncan’s merits are obvious. He has written a buoyant work filled with rueful reflections on our past and present errors, but charged with hopes for the future. In relating his impressions of army life he is at his best; some really fine pages describe the counterinsurgency training of the Green Berets; the numerous missions of the Special Forces into Viet Cong-held territory; the shop talk of war-weary soldiers groping to discover a rational explanation for their presence in Vietnam; the almost totally negative reactions of these same soldiers to the South Vietnamese army, government, and people; and the sorry plight in the armed forces of the American Negro, who still suffers from discrimination despite the efforts of his government to eradicate it.

“… There is much of value in The New Legions. Evident on every page is Duncan’s humanity. And the nobility of his cause— the end of the war and the triumph of peace, justice, and integrity throughout the world—is, of course, incontestable. His book is often illuminating and frequently provocative…”
Saturday Review August 12, 1967 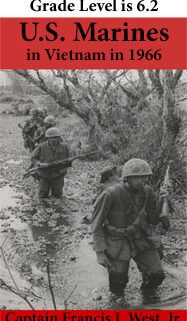