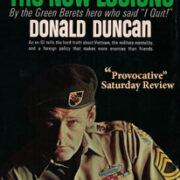 Read about his patriotism, his courage and his questions.

“Duncan’s merits are obvious. He has written a buoyant work filled with rueful reflections on our past and present errors, but charged with hopes for the future. In relating his impressions of army life he is at his best; some really fine pages describe the counterinsurgency training of the Green Berets; the numerous missions of the Special Forces into Viet Cong-held territory; the shop talk of war-weary soldiers groping to discover a rational explanation for their presence in Vietnam; the almost totally negative reactions of these same soldiers to the South Vietnamese army, government, and people; and the sorry plight in the armed forces of the American Negro, who still suffers from discrimination despite the efforts of his government to eradicate it.

“… There is much of value in The New Legions. Evident on every page is Duncan’s humanity. And the nobility of his cause— the end of the war and the triumph of peace, justice, and integrity throughout the world—is, of course, incontestable. His book is often illuminating and frequently provocative…”
Saturday Review August 12, 1967

One Soldier by John H. Shook
Scroll to top