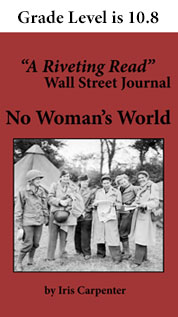 More than 200 female journalists were accredited to the Allied forces by the end of World War II, but it wasn’t until the final months of the war that a select few were allowed to report from the front. Writers like Iris Carpenter had found their own illicit ways to the fighting, but did so at their own peril. “No Woman’s World” is a coruscating indictment of the system against which they had to battle.

Nonetheless, it covers the struggle impressively, from the Battle of Britain on through V-E Day. The power of the book derives less from its coverage of battles than its unsentimental honesty. Carpenter records her own confused emotions on first entering Germany and having to decide how to view ordinary German citizens—as suffering victims, or the enemy, or both?

She is no less forthright in her descriptions of the American soldiers with whom she traveled—many of them poignantly young and courageous but also brutalized by years at war. Her bluntness make this memoir a riveting read.

When U.S. trucks and tanks hit Omaha Beach, says Iris Carpenter, drivers “cried and vomited” as they crunched over the bodies of G.I.s fallen in the first infantry waves. It was sickening and terrible, but the beachhead held firm.

Blonde, British-born Iris Carpenter, thirtyish, BBC commentator and war correspondent (London Daily Herald, Boston Globe), says that she held firm, too. Although ready to grant from the start that it was no woman’s world, she thought a “newspaper girl” had as much right to report what was happening as anyone else. Correspondent Carpenter stayed until V-E day and beyond, ended up with a new feeling of authority on military strategy, a shattered eardrum (enemy bombing) and a fiancé: Colonel Russell F. Akers Jr. of the U.S. First Army staff.

Much of No Woman’s World reads about as a woman’s war report might be expected to read: human-interest stories, hard-boiled anecdotes, Perils-of-Pauline asides. In field hospitals Correspondent Carpenter saw “the hideous mess which high-explosive makes of human flesh.” In newly liberated Paris she lived on “K rations, cognac and champagne.” On the Rhine she rushed over the newly captured Remagen Bridge while MPs shouted, “Keep ten paces between you and the next guy—it’s hot around here.”

Correspondent Carpenter also includes a critical tactical narrative of the fighting from D-day to the end. Having had access (she does not say through whom, but it is a fair guess) to First Army staff documents, she notes that First Army G-2 had the “first inkling” of Rundstedt’s Ardennes offensive weeks before it began, but that Bradley’s Twelfth Army group did not act on the information. Her conclusion: it was closer to “complete catastrophe . . . than any Allied commander would ever care to admit.” 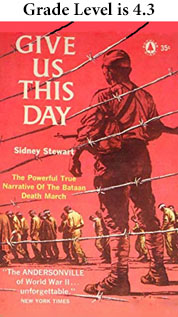 “I have read scores of books that came out of World War II, but I have read none that took such a tremendous grip on my emotions, nor one that evoked so strikingly the horror of war…This is more than a book, finely written as it is—it is a living experience.”  —Chicago Tribune

“Probably several million words have been written about the Bataan Death March, but no matter how many all have now been superseded by this splenlid book. If the men of that march needed a monument other than their own heroism they have it now in GIVE US THIS DAY. —Omaha World Herald

Download a copy for your Android or Apple device in epub format: 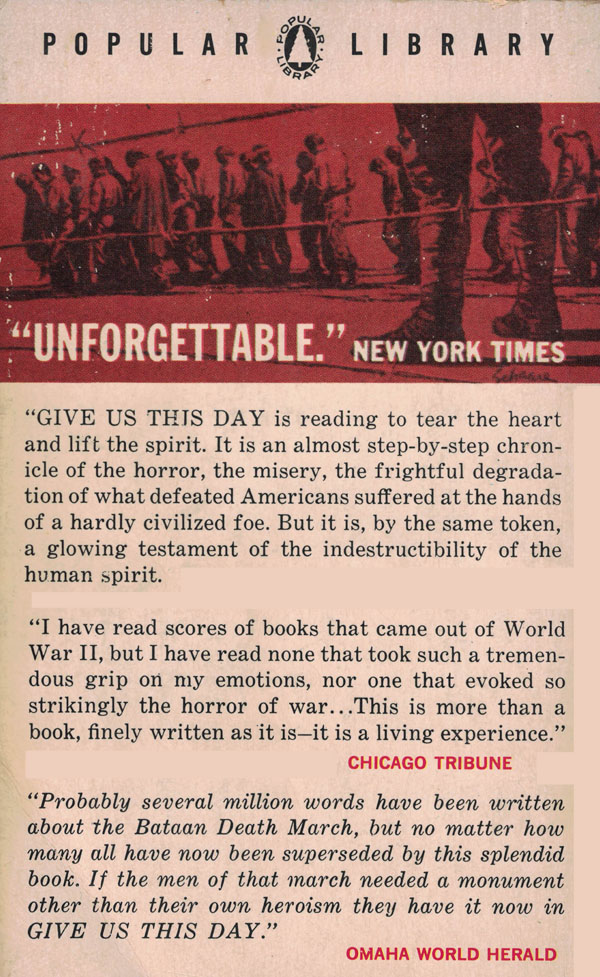 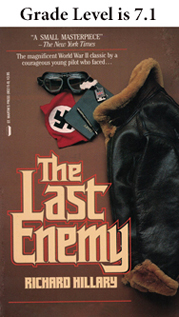 Download the epub format for your Android or Apple device.

The classic memoir that explodes the myth of the romance of war.

Young Richard Hillary, a Spitfire pilot in the RAF, thought that flying one-on-one against Hitler’s “roster of rogues” the Luftwaffe, would be exciting, gallant, and heroic.

However, when he is shot down, horribly burned and disfigured in the Battle of Britain, he faces a different battle in which he must confront the toughest enemy of all—himself—and learn true courage and heroism.

“Hillary takes us into the clouds of his flight-and into the depths of his suffering.”—Publishers Weekly
“FEW BOOKS ARE WRITTEN SO WELL OR PACK SUCH AN EMOTIONAL WALLOP.—UPI

“A war book that is destined to live … It will, I think, become a Classic.”
—from a BBC broadcast by Sir Desmond MacCarthy

“THE LAST ENEMY has been a classic in England since its publication. It deserves the same status here.” —Tulsa World

“A philosophical treatise on war which ranks with the
best.” —Montgomery Journal-Advertiser 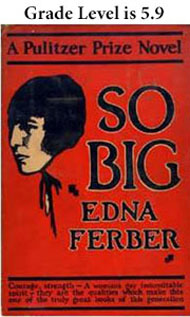 Here is the epub format:

Download Now!
Here is the mobi format for Amazon devices:
Download Now!
Winner of the 1924 Pulitzer Prize, So Big is widely regarded as Edna Ferber’s crowning achievement. A rollicking panorama of Chicago’s high and low life, this stunning novel follows the travails of gambler’s daughter Selina Peake DeJong as she struggles to maintain her dignity, her family, and her sanity in the face of monumental challenges. This is the stunning and unforgettable “novel to read and to remember” by an author who “critics of the 1920s and 1930s did not hesitate to call the greatest American woman novelist of her day” (New York Times).

So Big is a brilliant literary masterwork from one of the twentieth century’s most accomplished and admired writers, and still resonates today with its unflinching views of poverty, sexism, and the drive for success. 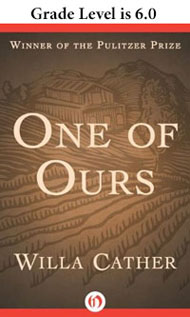 Reading level from a sample of Chapters 16, 17 and 18 from the Flesch-Kincaid index in Microsoft Word is 6.0.

Download an epub version, or a mobi version for Amazon devices from Project Gutenberg.

“It’s December 7, and that means we’re celebrating Willa Cather’s birthday here at NYPL (New York Public Library)! Willa Cather was a novelist, short story writer, essayist, and poet known for her descriptions of life on the American frontier and the immigrant experience. One of the foremost American female writers of the 20th century, Cather penned several novels from the 1910s through the 1930s that were highly popular in their time and are widely read today. They include O Pioneers!, My Antonia, and Death Comes for the Archbishop. She died in New York City in 1947, and today is her 143rd birthday.

“If you’ve never been introduced to Cather’s work, or you somehow managed to skip reading her in high school English, then you’re missing out on some truly gorgeous prose, vivid imagery, and moving, mature stories about plains living.

One of Ours
“This book, which is about the journey of Nebraskan Claude Wheeler from unhappy farmer to proud soldier in World War I, won the Pulitzer Prize for the Novel in 1923. One of Ours was criticized by many prominent authors, including Ernest Hemingway and Sinclair Lewis, for its heroic and rosy depiction of war, but the American public disagreed, and it became one of the bestselling books of that year.”

Source: Where to Start with Willa Cather by Nicholas Parker at https://www.nypl.org/blog/2016/11/30/willa-cather

1. “Oh, so poignant! Willa Cather’s genius for capturing the American ethos of a century past shines radiantly in this unusual look at the son of a farm family coming of age as the nation hesitantly inches toward the Great War. Achingly sensitive to relationships of all kinds, Cather’s novel ponders delicate aspects of friendship, marriage, love, family, son-ship, and community. Never pedantic, never unoriginal, and full of subtle insight, this engaging but lesser known novel may particularly interest young people.”

2. “This is a beautifully written book with a strong sense of place and time – prairie life prior to WWI, and then the main character’s participation in the war. In that sense, it is almost two books, with the earlier part being the stronger. The main character is a depressed kind of young man, who questions the meanings of things, and this may not appeal to everyone, although it is vividly portrayed by the author. Her lyrical and often poetic language give the book and the character’s experiences a universality.”

3. “This woman could put into words not only glorious descriptions, relating to the minutiae of life and loves in the Midwestern farming community, but also every individual’s feelings. We are there, we are at the kitchen table, we are immersed in the horrors of Flanders and its vermin infested trenches. We live the life and emotions of Claude Wheeler, and at last, in the final moments, we know that he truly chose his destiny.” 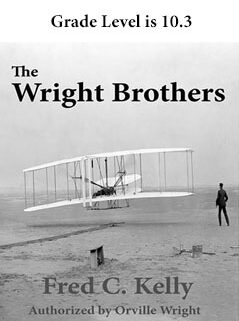 To read this ebook on a computer, or tablet using Calibre, or Google Play Books, or iBooks on your iPad, download this epub format.

With Calibre, you and your students can read this ebook in epub format on computer screens. By changing the background color, and enlarging the font, the reading experience on a computer screen is reasonable. On Chromebooks, the operating system will offer an ereading app when you open the epub file.

In this fascinating, highly readable biography, Fred C. Kelly, a former newspaperman, author, and an old friend of the Wrights, tells the story of the two brilliant, dedicated, flight-obsessed bicycle mechanics from Ohio who first realized mankind’s age-old dream of conquering the skies.

Long considered the definitive Wright biography (the manuscript was read and approved by Orville Wright), this book recounts the Wrights’ small-town boyhood, their early interest in all things mechanical, the establishment of the Wright Cycle Shop, and the complete behind-the-scenes story of how they designed, built, tested, and flew (December 1903) the first “Flyer.”

Enhanced with sixteen rare photographs, Mr. Kelly’s engaging account avoids minute technical description, yet describes simply and clearly the technological innovations that enabled the two brothers to succeed where so many others had failed. Anyone interested in the mechanics of flight or early aviation will find this volume a splendid introduction to the Wright brothers and their epochal achievement.

Grade level from a sample of four chapters in the Flesch-Kincaid analysis is 10.3.