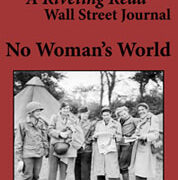 More than 200 female journalists were accredited to the Allied forces by the end of World War II, but it wasn’t until the final months of the war that a select few were allowed to report from the front. Writers like Iris Carpenter had found their own illicit ways to the fighting, but did so at their own peril. “No Woman’s World” is a coruscating indictment of the system against which they had to battle.

Nonetheless, it covers the struggle impressively, from the Battle of Britain on through V-E Day. The power of the book derives less from its coverage of battles than its unsentimental honesty. Carpenter records her own confused emotions on first entering Germany and having to decide how to view ordinary German citizens—as suffering victims, or the enemy, or both?

She is no less forthright in her descriptions of the American soldiers with whom she traveled—many of them poignantly young and courageous but also brutalized by years at war. Her bluntness make this memoir a riveting read.

When U.S. trucks and tanks hit Omaha Beach, says Iris Carpenter, drivers “cried and vomited” as they crunched over the bodies of G.I.s fallen in the first infantry waves. It was sickening and terrible, but the beachhead held firm.

Blonde, British-born Iris Carpenter, thirtyish, BBC commentator and war correspondent (London Daily Herald, Boston Globe), says that she held firm, too. Although ready to grant from the start that it was no woman’s world, she thought a “newspaper girl” had as much right to report what was happening as anyone else. Correspondent Carpenter stayed until V-E day and beyond, ended up with a new feeling of authority on military strategy, a shattered eardrum (enemy bombing) and a fiancé: Colonel Russell F. Akers Jr. of the U.S. First Army staff.

Much of No Woman’s World reads about as a woman’s war report might be expected to read: human-interest stories, hard-boiled anecdotes, Perils-of-Pauline asides. In field hospitals Correspondent Carpenter saw “the hideous mess which high-explosive makes of human flesh.” In newly liberated Paris she lived on “K rations, cognac and champagne.” On the Rhine she rushed over the newly captured Remagen Bridge while MPs shouted, “Keep ten paces between you and the next guy—it’s hot around here.”

Correspondent Carpenter also includes a critical tactical narrative of the fighting from D-day to the end. Having had access (she does not say through whom, but it is a fair guess) to First Army staff documents, she notes that First Army G-2 had the “first inkling” of Rundstedt’s Ardennes offensive weeks before it began, but that Bradley’s Twelfth Army group did not act on the information. Her conclusion: it was closer to “complete catastrophe . . . than any Allied commander would ever care to admit.”

The Last Enemy by Richard Hillary

Benito Juarez: Builder of a Nation by Emma Gelders Sterne (For Young Adults...
Scroll to top