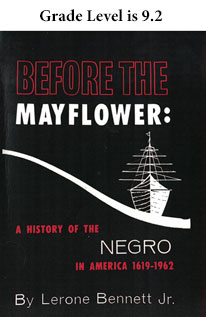 Mr. Bennett gives voice to Black Americans, and to the cultures they brought with them. Through impeccable research, he has uncovered history and culture that was not readily available those many years ago. This book was published and available at almost the same time I finished my degree. I found it later when I had the luxury of being able to read what I wanted, rather than that which was assigned, and have used it to some degree in home schooling my son (though it is too difficult for most high school students). Highly readable and enormously enlightening.

This was an amazing piece of work. I knew that people of color in this country had it rough but this truly shows just how bad. Even with all of the hardships people of color tried again and again to be the best that society would not let them. I was inspired by this book to continue to strive for progress and thus success. The stories of my ancestors have shown me that I come from a strong stock that can survived the worst of times so that I may have the best of times.

From the inside flap of the print edition of 1962:

This is a history of the American Negro, whose ancestors arrived at Jamestown a year before the arrival of the “Mayflower.”

The book begins in Africa with the great empires of the Nile Valley and the western Sudan and ends with the Second Reconstruction, which Martin Luther King Jr. and the Sit-in Genera­tion are fashioning in the North and South. Written in a dramatic, readable style, Before The Mayflower throws a great deal of light on today’s headlines. As such, it will be a valuable addition to the library of every discerning American.

Grounded on the work of scholars and specialists, the book is designed for the non-specialist. Based on the trials and triumphs of Negro Americans, the book tells a story which is relevant to all men.

Here are the Negro Minute Men of Lexington and Concord and the black soldiers who stood with Andrew Jackson at New Orleans and Ulysses S. Grant at Petersburg.

Here also are the forgotten figures of American history: Phillis Wheatley, the slave poet who became the second American woman to write a book; Nat Turner, the mystic who led a bloody slave revolt; P. B. S. Pinchback, the Negro who sat in the Louisiana governor’s mansion and dreamed of the vice presidency.