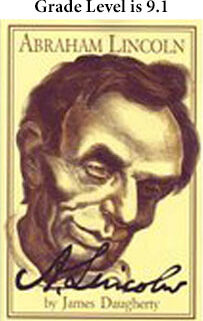 James Henry Daugherty (1889-1974), winner of a Newbery Medal for Children’s Literature, was born in Asheville, North Carolina, but grew up in Indiana and Ohio. When he was 9, the family moved to Washington D.C., where he studied at the Corcoran School of Art, and the Philadelphia Art Academy. He then spent two years in London studying under Frank Brangwyn.

According to the New York Times, Mr. Daugherty “won distinction as a writer and illustrator of children’s books on American historical themes.”

Mr. Daugherty’s books of biography and frontier tales include “Abraham Lincoln,” “The Landing of the Pilgrims,” “West of Boston” and “Their Weight in Wildcats.”

Daugherty’s first publication was an illustration for John Flemming Wilson’s series, Tad Sheldon, Boy Scout (1913). He then worked camouflaging ships and creating four murals in Loew’s State Theatre, Cleveland, while illustrating fiction, and signed and unsigned magazine work. In 1925 he was asked to illustrate R.H. Horne’s King Penguin which he describes as the first book he ever illustrated. In 1926 S.E. White’s Daniel Boone, Wilderness Scout appeared, with Daugherty illustrations. He won the Newbery in 1940 for his self-illustrated Daniel Boone and was runner-up for two Caldecott Medals with Andy and the Lion, 1939, and Gillespie and the Guards, 1957. 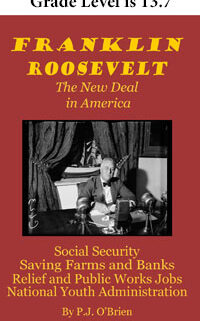 Grade Level on the Flesch-Kincaid readability scale is 13.7. Download an epub version for your Android tablet or phone:

Download Now!
Download a mobi file for your Kindle device:
Download Now!
This is the story of some of the most dynamic years in the political history of the United States. Every student whose parents or grandparents have ever received Social Security, or benefited from a low-down payment FHA mortgage, or received unemployment insurance has Franklin Roosevelt to thank. After his inauguration in March 1933, Roosevelt persuaded Congress to build new programs to support the poor and the unemployed. He sought to save homes, farms and banks at risk of being lost during the Depression, and he did. What were these programs, and could any of them have worked in our century, such as during the crisis which started in 2008?

With Calibre, you and your students can read this ebook in epub format on computer screens. By changing the background color, and enlarging the font, the reading experience on a computer screen is reasonable.