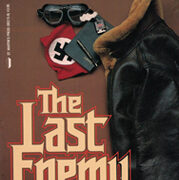 Download the epub format for your Android or Apple device.

The classic memoir that explodes the myth of the romance of war.

Young Richard Hillary, a Spitfire pilot in the RAF, thought that flying one-on-one against Hitler’s “roster of rogues” the Luftwaffe, would be exciting, gallant, and heroic.

However, when he is shot down, horribly burned and disfigured in the Battle of Britain, he faces a different battle in which he must confront the toughest enemy of all—himself—and learn true courage and heroism.

“Hillary takes us into the clouds of his flight-and into the depths of his suffering.”—Publishers Weekly
“FEW BOOKS ARE WRITTEN SO WELL OR PACK SUCH AN EMOTIONAL WALLOP.—UPI

“A war book that is destined to live … It will, I think, become a Classic.”
—from a BBC broadcast by Sir Desmond MacCarthy

“THE LAST ENEMY has been a classic in England since its publication. It deserves the same status here.” —Tulsa World

“A philosophical treatise on war which ranks with the
best.” —Montgomery Journal-Advertiser

Give Us This Day by Sidney Stewart
Scroll to top