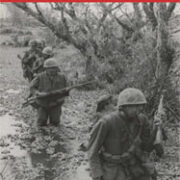 Last Flight from Singapore with Maps and Illustrations by Arthur G. Donahue

The Underdogs, a Story of the Mexican Revolution by Mariano Azuela
Scroll to top