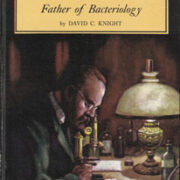 Robert Koch loved to solve problems. He wanted to end the anthrax infections that were killing so many of his neighbors’ sheep and cattle. And then he began working on an even smaller microbe that caused tuberculosis and was killing millions around the world.

This is a story of his investigations told in a readable prose for young adults and with enough details to satisfy adult readers. The author tells the Koch story well. Koch’s energy and dedication are still inspiring.

Those closest to Koch admired him for the ideal scientific worker that he was. They admired the severe way he himself criticized his own work; the high intelligence he brought to every problem; the inventiveness he used in overcoming great obstacles. Perhaps most of all they admired his great courage and constant hard work in sticking to something where other scientists had failed.

The grade level is 8.7 on the Flesch-Kincaid readability scale in Microsoft Word. A study guide is included at the end of the ebook for secondary school students.

The Curies and Radium by Elizabeth Rubin
Scroll to top