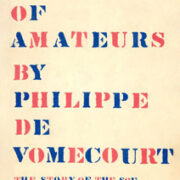 AN ARMY OF AMATEURS is the incredible story of the resistance of the ordinary Frenchman in the street to the Nazis—secretly sapping the strength of the invading armies until the final Allied victory. Here is a picture of a group of dedicated but inexperienced citizens who risked their lives and displayed enormous courage—winning despite the many blunders that amateurs were bound to make.

Philippe De Vomécourt, who with his two brothers, and the aid of Great Britain, helped to organize the resistance, began his operations by obtaining a job with the Nazis as an inspector of railroad trucks-enabling him to see that these trucks failed to get to the proper destination, to plan “escape routes” and assist in smuggling Jews to safety.

It was not long, however, before the Nazis began to suspect Philippe of being a traitor and eventually the luck of the de Vomécourt brothers ran out. One of them—who saw to it that every single torpedo ship leaving Germany was blown up—paid for his work by death in a concentration camp. Philippe was sentenced to hard labor but soon showed his unfailing ingenuity and daring by managing to escape—taking with him fifty-three other prisoners. Departing for England with a small group, he returned to France before D-Day to supervise the cloak-and-dagger activities of his own group, Special Operations Executive, enlisting anyone who was willing to help them harass the Germans.

AN ARMY OF AMATEURS is an important book, packed with heroism, hair raising escapes, and some sharp criticism of France’s allies.

Philippe De Vomécourt was born in France in 1902 and educated in England. As a young man, he joined the Flying Corps (British) in World War I, later studying agriculture and managing a farm in Africa. After marrying, he lived in the New Herbrides and then Australia before settling in France.

Runaway Russia: An American Woman Reports on the Russian Revolution

Agent in Italy: A Memoir of a Spy in World War II with a Study Guide
Scroll to top