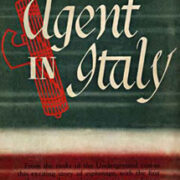 I couldn’t hear a sound, either from the corridor and offices beyond the door or from the sleeping city of Milan outside. All the rest of the world could have died.

It was stifling. Italian police stations are badly ventilated. My throat was very dry and I kept coughing. I smoked another cigarette but that made it worse. The smoke hung in the dead air.

I tried the door again. My wet palm slipped on the unclean handle. The door was still locked, of course.

I didn’t know exactly what time it was because they’d taken my watch away from me. I guessed about three in the morning. I was going to be shot at six.

Thus begins this amazing; book—both a thrilling story of personal danger in Italy’s underground movement, and a fully detailed, authentic report on the crumbling of Italian Fascist morale under the terror of German occupancy.

The gripping adventures experienced by S. K. during his undercover work in Italy give us a picture of methods which more than match all we have heard of German and Russian espionage work. Yet they are absolutely bona fide—the author’s credentials have been carefully checked. He remains anonymous for the protection of those colleagues still carrying on the Democratic revolution.

Working with groups of fearless Italian patriots, it was S. K. who first revealed to the outside world through confidential information on Germany’s flame-throwing tanks, the intention of Mussolini to move against Greece, the use of American dollars for the purchase of oil in French African ports by submarine captions, the shipping of Messerschimitts to Central America, the existence of camouflaged airports in Nicaragua and Bolivia, the sending of Stukas to Japan, and the building of new Condors in Holland.

In addition to these sensational disclosures, agent in Italy now reveals fully detailed story of the German occupation of Italy, giving facts and figures, including an estimate of 400,000 Germans now keeping the junior Axis partner under shaky control.

Filled with tense and breathless incident, this book, the first to disclose the bitter ordeal of Italy, bring the excitement of the mystery novel to one of the most important factual documents of our day.

To read this ebook as a pdf, see the link below.
Agent In Italy

Directions on how to email this file to your device are here.
To add this mobi file to your Kindle for PC software to read the chapters on your computer, see instructions at http://tinyurl.com/y8gsazq.

An Army of Amateurs

Escape from Corregidor by Edgar D. Whitcomb
Scroll to top