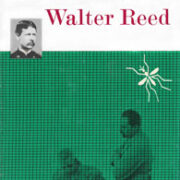 No sooner had the Spanish-American War ended —a war lasting less than five months—than a killer of men appeared in Cuba that was far deadlier than any man-made arms. Yellow fever, which for centuries had ravaged the island population, struck down Cubans and Americans alike.

The cause of yellow fever was unknown. It was believed to be spread by disease-fouled bedding and clothes of the victims. With only this theory at hand, Walter Reed went to Cuba in 1900 as head of the Army’s Yellow Fever Commission. His orders from Surgeon General George Sternberg were: “Wipe it out, Major, before it destroys all of the American occupation force in Cuba, wipe it out if you can.”

Reed was well qualified for the task. When the Spanish-American War had broken out, he had been appointed chairman of a committee to investigate the cause and mode of propagation of typhoid fever, which had broken out among the soldiers. His Report on the Origin and Spread of Typhoid Fever in U. S. Military Camps, published after Reed’s death, revealed a number of facts about the disease that had not been known before.

Earlier Reed and an associate had disproved the theory of Giuseppe Sanarelli, that the Bacillus icteroides was the cause of yellow fever.
Vanquishing Yellow Fever is the story of brave men—those doctors James Carroll, Jesse Lazear, and Aristides Agramonte, who served with Reed on the Commission, and the volunteers who risked their lives by subjecting themselves to the bite of the dreaded mosquito. Edward Dolan presents this dramatic story in a striking and gripping manner.

The determination of the Commissioners to succeed is a lesson in itself. At first they met defeat at every turn; finally they turned to the discredited theory of Dr. Carlos Juan Finlay: that the yellow fever virus was carried by the mosquito, Culex fasciatus, and that the disease was induced by its bite.

Dr. Jesse Lazear died proving the validity of this theory by experimenting upon himself. Reed, after successfully carrying out his orders, returned to Washington, D. C, in 1901, where he died November 23, 1902. The Army general hospital in Washington, D. C. was named in his honor.

Pioneers of Freedom by McAlister Coleman
Scroll to top