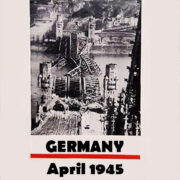 Download an epub file for Apple, and Android devices:

An excerpt from The New York Times review, December 4, 1946 by Orville Prescott.

“Miss Bourke-White is one of the most distinguished of American photographers. Before the war she was a specialist in pictures of industry. During the war as a photographer for Life she took many of the best frontline pictures which appeared in that magazine, in Russia, in Italy and in France and Germany. She traveled by jeep, by plane and on foot wherever reporters were allowed to go, which often meant where shells were exploding and bullets flying. But she did not just take pictures. Miss Bourke-White is a good reporter as well as a photographer. She talked with all manner of men and with resourceful enterprise sought out representative and significant men. The present volume includes 128 of her excellent pictures of Germany in defeat, in addition to Miss Bourke-White’s report on her investigations….

“….Miss Bourke-White talked with hundreds of Germans. Among them she found a few, a pitiful few, who had not succumbed to the Nazi infection. Most of therm, did not admit or realize that there was any infection. They did not admit that Hitler was evil, that Germany had started the war, that they were aware of the torture and death camps, that they in any way shared responsibility for their government’s and their nation’s crimes. Many of them expected the Allies to finance Germany’s recovery, to be responsible for German employment.

“In Bremen Miss Bourke-White found an old friend, a German girl who had graduated from the Columbia School of Journalism. “Here will be somebody I can talk to,” she thought. But the intelligent, American-educated girl turned out to be an ardent defender of Nazism and all its works. “We have believed in the party principles for centuries,” she said. “Adolf Hitler never knowingly told a lie.”
More disturbing, because of their greater power and influence and because of the respectful deference with which the Allies treated some of them, were the great industrial lords of the Ruhr. Miss Bourke-White talked with many of them, the men who had made Hitler’s war machine possible and who had profited mightily in the process. And they were all just innocent business men uninterested in politics, worthy citizens who expected to continue to run their peaceable enterprises! If they are allowed to, and if the Allies do not foster a genuine democracy in Germany, the third World War will come sooner than we expect it. That is the underlying theme of ‘Dear Fatherland, Rest Quietly.’ “