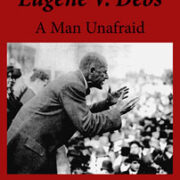 From a Review by H.L. Mencken in the American Mercury, August 1930.

MR. COLEMAN’S sub-title may seem a bit pretentious, but the record bears it out. Debs was one of those fanatics who are simply unacquainted with the meaning of fear. At a time when practically all of the other Socialists of America were running ignominiously for cover he stood his ground magnificently and went to jail without a quaver. He would have gone to the gallows, I believe, in the same serene and unperturbed manner. Perhaps it is something of a slander to call him a Socialist at all. He died without knowing more than the A B C of Marxism, and had relatively little to do with its chief prophets. The shabbiness of spirit that is their chief mark, at least on this side of the water, was not in him. An ignorant man, and, in more than one way, a childishly silly man, he yet managed to show a singular fineness of character.
Someday, I suppose, his admirers will be comparing him to Lincoln, as Lincoln is compared to Jesus. The likeness is faulty in each case. Lincoln was a far shrewder and more politic fellow than Jesus, and Debs was far braver and more forthright than Lincoln. In old Abe, in fact, the cross-roads politician was always visible. He never did anything without figuring out its consequences to five places of decimals, and when those consequences promised to damage his private fortunes he usually found a good reason to refrain. But Debs banged through life without caring a damn, innocent and cocksure. He got into trouble very often, but I can find no evidence that he was ever bothered by doubts.
If common decency ever gets any credit in America, and the schoolbooks are revised accordingly, there will be a chapter in them on the great encounter between Debs and Woodrow Wilson. They never met face to face, for Wilson was in the White House and Debs was in prison; nevertheless, their souls came together, and it was old Gene’s that won hands down.
The conflict between them had been fought out in the world many times before, but never by two such perfect champions. On the side of Wilson were power, eminence, learning, glory, a vast forensic skill, a haughty manner, and the almost unanimous support of the American press and people; on the side of Debs there was only the dignity of an honest and honorable man. Debs remained behind the bars, but Wilson danced naked before the world, exposed to posterity as the abject and pathetic bounder that he was. It was his tragedy that he was not only quite unable to achieve decency himself, but also quite unable to recognize it in other men. When he died Harding turned Debs loose, with a gesture both generous and charming. Thus it remained for a boozy Elk out of the Jimson weed country to teach manners to a Princeton Presbyterian….
The whole labor movement in the United States is in the hands of sleek, oily gentlemen who have learned that it is far more comfortable to make terms with the bosses than to fight them. These gentlemen, as I have said, are well fed and well tailored, and have no sympathy with dreamers. Presently they will be collecting money for a monument to old Sam Gompers. But they will never propose a monument to Debs. • In the long run, however, he will probably be recalled, at all events by romantics. There was genuinely heroic blood in him, though he sacrificed himself to a chimera. Mr. Coleman has told his story very well.

Patrick Henry: Firebrand of the Revolution by Nardi Campion, Reading Level is...

The Long Black Schooner: The Voyage of the Amistad
Scroll to top