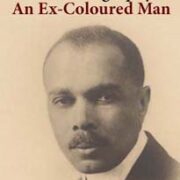 If you or your students want to download directly from this web site to an Amazon device, you can use the mobi format below. When you find the mobi file in ES File Explorer, it will then open in the Kindle app on your tablet. If you download an epub file to your Amazon tablet, it will also open if you have an app such as Overdrive on your tablet. The Kindle app offers an excellent reading experience to start with. Overdrive may need some customization of font size.

From Reviewers on Goodreads:

I have to admit, for a good while I had no idea that this was a novel. It is so convincing as an “autobiography” that I believed this to be Johnson’s own story. Some of it is, from what I glean off the back cover blurb. Whatever the case, it is a book that is immediately engrossing; a remarkably evocative time capsule that whisks and immerses the reader into the world of early 20th-century America…

The novel is honest, flavorful and lovingly rendered, and even with all that has come to pass it remains relevant.

I loved nearly every word of it.

This is a book where a lot of things happen one right after the other and yet it didn’t strike me as episodic. It flowed very naturally. Overall, I’m very happy to have read this classic and would recommend highly to everyone. The curiosity and amusement which led to my picking up the book was anthropological in nature but I also ended up just enjoying a very good and interesting story. This really is an outstanding book.

James Weldon Johnson wrote two autobiographies, this fictional one of a character referred to only as the Ex-Colored Man, which he published anonymously in 1912, and Along This Way, relating his own remarkable life and career, published only four years before his tragic death in 1938, when the car he was riding in, driven by his wife, was hit by a train.

The Autobiography of An Ex-Colored Man is his most famous book and it recounts the life of a biracial man born in a small town in Georgia just after the Civil War. He benefits from his black mother’s nurturing and guidance, his absent white father’s financial support of them both, and his innate intelligence and musical abilities. His discovery at school that he is not white shocks him and casts a shadow over his future. He can “pass” for white, however, and the main theme of the book is his struggle over whether to identify as white or black.

Johnson was born in 1871 in Jacksonville, Florida; unlike the Ex-Colored Man, who planned to attend Atlanta University but never did, he graduated from there in 1894. Among other achievements are his admission to the Florida State Bar in 1897 as the first African-American to do so since Reconstruction, successful Broadway music career with his brother Rosamond, service as U.S. Consul to Puerto Cabello, Venezuela and Corinto, Nicaragua, appointment as first executive secretary of the National Association for the Advancement of Colored People, and career as professor of literature at Fisk University in Nashville and New York University.

I highly recommend this book and plan to read Johnson’s own autobiography, as well. I have to give a shout out to James K. White, whose narration of the free LibriVox audiobook I listened to was outstanding. (Here is the audiobook.)

Sea and Earth: The Life of Rachel Carson