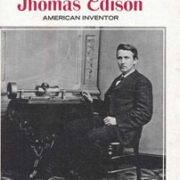 Download in the epub format for Android and Apple devices:

A self-made man with little formal education, Thomas Edison had a remarkable mind and possessed the imagination, creative ability, self-confidence, and perseverance to succeed brilliantly in his field. It was he who perfected the incandescent electric bulb, improved on the telephone, made the first phonograph, and pioneered motion pictures. The list of his other inventions is long.
His traits were so common to the traditional American character of his day that he can right¬fully be called “an American inventor.” Most important was his ability to work hard. From the time he was twelve years old until-he reached his middle eighties he worked, often day and night. By trial and error he patiently attacked problems until he found their solutions. With his men he perfected the teamwork approach to systematic research. His laboratories at Menlo Park and West Orange, New Jersey, were the early models for the huge industrial research and development institutions of today.
In a biography rich with anecdote, Roselyn and Ray Eldon Hiebert present an unforgettable picture of this lively and colorful man—a true rugged individualist.