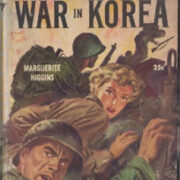 Why Does the Volume of Reading Matter?

They Called it “Purple Heart Valley”-A Combat Chronicle of the War...
Scroll to top